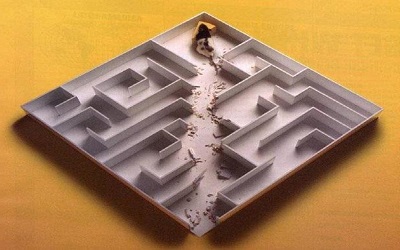 Things I Learned From the Mouse

Once upon a time, I worked for a very large corporation. It is my belief that when they give a title to someone, such as the one I had, however insignificant, this particular corporation confiscates that person’s soul and puts it in a vault, where they torture it by angrily and repeatedly shouting the key points of the latest Japanese-inspired corporate efficiency trend. (MINI KAIZEN! MINI KAIZEN! LEAN! LEAN!) The soul is held hostage for the duration of your employment, which explains many of the decisions that I made while I was there, and also why I was willing to participate in those idiotic huddles. (“We are AWESOME! We are AWESOME! We are AWESOME!” Every morning. Yep.)

I wrote funny vignettes about corporate culture. I did book reviews. Made fun of the wedding planning process. I wrote about my father, when he died. It was a cool gig, with a captive audience.

I carried the mouse and the bottle outside to the flower beds/smoking area and dumped it on the ground. The mouse was reluctant to leave the bottle, and demonstrated this by locking all four of his little feet against the plastic, with his tail hanging out the neck. Now. This is where I put my college degree and lack of soul to good use: I tugged on his tail. With authority. Surprisingly, he didn’t take the hint. I stood there for several minutes, shaking the bottle and yanking on his ass, failing to dislodge him and may have, in fact, given him PTSD.

From the darkness, in the corner from behind a glowing red ember, the man we all referred to as “The Smoking Man” said Just put down the bottle. He’ll come out on his own. He may even have been laughing at me. Or…coughing. Hard to say.

So I did, rolling my eyes at my own stupidity. And the mouse left. My point, at the time was “Sometimes change is scary and makes your ass hurt but it might turn out not to suck so just step away and leave quietly with very little ruckus and embrace the fact that you are now unable to support your families and try not to get eaten by feral cats,” or something like that.

I was rehired into another management gig six months later, primarily because I lived there already and had a pulse.

Even at that embarrassing level, corporate life was pretty cutthroat. Profoundly stupid people get promoted for shouting enough corporate buzzwords during meetings. Smart, competent, independent thinkers get passed over. Everybody throws everybody under the bus. And people who wear T-shirts with a Jolly Roger on them with the words “The Beatings Will Continue Until Morale Improves” to team-building events don’t get invited back after the second wave of layoffs. Or so I hear. It was a long time ago.

My point. Yes, that. I find myself returning to that mouse today.

Let me just beat the shit out of that metaphor: He preferred drowning in a pool of artificially sweet acid that most certainly would have killed him to letting go in a leap of faith and trying to figure out where he actually did belong. He let fear make him ignore the obvious tugging on his ass, showing him where to go.

(It occurs to me at this point that some of you may be thinking there was a much kinder and less verbose example of this metaphor in “Finding Nemo.” Who asked you? Figure out your own damn metaphors on your own blog!)

I can be the same way. Sometimes I would rather drown in figurative shit that makes it hard for me to get out of bed every morning than face an unknown demon alone. It seems easier.

Because while I may not always know who has my back, at least I know what to expect, and I am rarely disappointed. There is a cold comfort in being jaded and cynical. But that is no way to live.  Beneath the façade of every cynic beats the heart of a wounded idealist who desperately wants to be wrong.

Recognize when it is time. And then let go.

7 thoughts on “Things I Learned From the Mouse”