My trip to Italy: An Interview

So I’m back from Italy. As I obligated myself to post once a month, this is my offering for April. Don’t get too excited, it is fairly uninspired and I have rescued it from the trash twice, only because I don’t want to start again. I am going to be in two upcoming anthologies, which means I have accomplished 2/3 of another of my goals for this year, as well as 1/4 of the blog-once-a-month goal. Just gotta work on those goal pubs. Not bad for an old broad.

Two days before my vacation, I learned that the social media job I like to make fun of that paid for this trip all but dried up, taking half of my income with it. I will manage. I might even find something else. But it made me think of something my friend Aussa, of Hacker, Ninja, Hooker, Spy wrote that a man said to her once, in what I assume was a fit of rejection fury: “I remember mine said I would never actually “become” a writer, that I’d end up being a “dull housewife who gets excited about sending Christmas cards” (..?) and that I’d always talk about “that one time I left the country.”

There is good possibility that was the last time I get to leave the country. I’m not made of money, y’know. I saved up for that trip. I really internalized that comment, for some reason, even before the job ended. What kind of tiny little man says something like that? To anyone? Anyway.

Our guest today is the host of this fine publication, who is here to talk about her recent trip to the Amalfi and Sorrento coast in southern Italy.

Me: Well Hello there! Welcome back!

Also Me: Thanks! You too!

Me: So, what made you decide to take a trip to southern Italy? Are you Italian?

Me: Do you know any people from Italy?

Me: Was it a spiritual journey of self discovery?

Me: Cultural and historical experience?

Me: Do you eat a lot of Italian food at home?

Me: Did you have to use google maps to even know what direction you were flying?

Also Me: SO DID YOU.

Me: Fine. Whatever. Enlighten us as to why you flew 5,000 miles and came back with a headcold.

Also Me: I wanted to go somewhere interesting that didn’t involve being in a car for 13 hours with my mother and at least 2 dogs and my cousin needed a roommate. So.

Me: Fair enough. So, how did it go? How did that pillow you bought to sleep on the plane work out?

Also Me: I was actually too embarrassed to inflate it.

Also Me: Because it looks like a lifejacket for a monkey and the lady in the seat next to me was already looking at me like she wanted to hand me a Clorox wipe.

Me: That was because you dropped ranch dressing down your front.

Also Me: OK but I just couldn’t whip out a weirdly shaped flotation device and start cheerfully blowing into it after that. Although Clorox lady didn’t bring a pillow and she tried to sleep with her face smooshed against the seat in front of her which was kind of hilarious and I thought about offering her my monkey jacket but that seemed like a boundary breach so I didn’t.

Me: Who saw that coming? But the trip was fun, right?

Also Me: It really was! The people on my tour were very nice, the guide was perfectly lovely and the accommodations and the scenery were amazing. It was truly beautiful and I’m so glad I went. 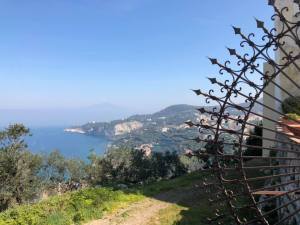 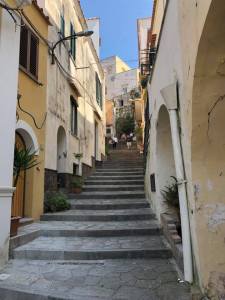 Also Me: I HAD A GREAT TIME, GODDAMNIT. NOW STOP ASKING ME.

Me: Soooooooo….how was the food? 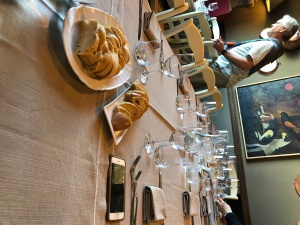 Also Me: It was fine.

Me: Fine? Did you eat a lot of mussels and squid? I know how you love those.

Also Me: IT IS NOT ITALY’S FAULT.

Me: That what? That you have the palate of a ten year old?

Also Me: YES THAT EXACTLY. I found plenty of things I could eat. I just had to pretend to like some stuff I didn’t, is all. Shut up.

Me: What were you favorite meals?

Also Me: We had a farm to table dinner in Massa Lubrense that was excellent. The host was amazing, the wine and the food and the presentation were fantastic.

Me: Did they not also serve squid?

Also Me: WHO ASKED YOU I TRIED IT OK

Also Me: There was great food in Sorrento, as well as Naples, and the farewell dinner in Rome was really, really good. I also found some fantastic lasagna at a little tiny place in Naples, literally cooked by a grandma and served by her son and granddaughter. The entertainment was the little great-granddaughter, who was 2.

Me: What was your favorite part of the trip?

Also Me: The hike up Vesuvius and the hike at the Path of the Gods were both challenging, I felt like I had really done something those days. The ruins in Pompeii as well Paestum were fun to look at and learn about. Capri would have been more fun if it had not rained – we missed a boat ride around the island. And the views were spectacular.

Me: You just don’t want to download them because you have 4,000 pictures on your phone. And then you would have to label them.

Me. What was your least favorite part?

Also Me: The five hour layover and Rome followed by a 10 hour plane ride. The coughing teenager I believe to be responsible for this cold was on that flight. I want to go back in time and find him and get him arrested at the TSA checkpoint before he has a chance to board that plane.

Me: Did you learn anything?

Me: What did you buy?

Also Me: IT’S NOT FOR ME. Also a dress from Capri that I didn’t try on that I have already given to goodwill after having used it to pad my limoncello in my suitcase. I bought ceramic jewelry and knick-knacky stuff that will be broken or lost in a year but I like them.

Me: How’s that plan to eat more simply going?

Also Me: Great! I just had some pizza from last night. And a mango. Super simple.

Me: Aren’t you going to label them?

Also Me: Nope. Don’t you know how to reverse image search?

Me: Do you feel any better about humanity in general?

9 thoughts on “My trip to Italy: An Interview”