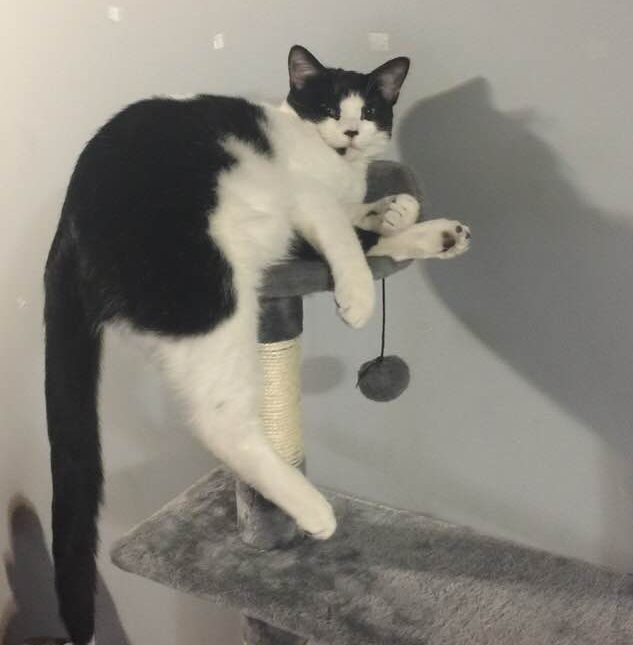 Turns out the rechargeable ancillary cat and I have more in common than irrepressible cuteness, a love of naps and a need to frantically dig through the garbage once a day.

As of late, he has taken to stealth Ninja attacks on the old lady cats, and while he seems to have a vague idea of what all this means, he’s not exactly sure what he is supposed to be doing. He bites their necks really hard and flops across them like a dimwitted shrug until they scream and I separate them. He was altered a long time ago, I’m not sure why all this is an issue now, but there we are.

That isn’t what we have in common.

The old lady cats HATE him. I am going to wake up some morning and find an empty pelt and two fat, self-satisfied dames who need a bath. 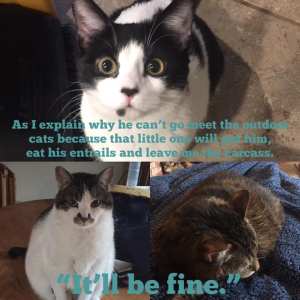 So I did what any respectable cat owner would do and I ordered something called Boar-Mate. Which is a pheromone pig farmers use to make hogs more receptive to…jesus I don’t want to talk about this. What it does to cats is, apparently, the opposite. If you apply this pheromone to the female cats about once a week the idiot boy cat will think they are male and that will be the end of those shenanigans.

Apparently, “fixing” a male cat doesn’t put an end to the testosterone-driven stupid, it only dims it. And he was plenty dim, but apparently now we have to gaslight him, too.

Also not what we have in common.

I turned 52 since my last post. We went to Colorado again, and while the dispensary thing has lost all of its novelty, it is still a beautiful state. I checked housing and while I can’t live in Frisco or Steamboat, I could live in a smaller town. I’ve been doing a lot of thinking about how I would like to spend the next phase of my life and it differs so much from what I thought I wanted that it’s a little overwhelming. I have a spent an inordinate amount of time trying to fit where I do not. Looking for “my people” only to feel alone most of the time. I read something about this phenomenon the other day:

“And if we learn young to let others push their agendas on us, we’ll become people who are strivers. Striving to meet expectations we never set, following along with plans we didn’t agree to, arrangements we didn’t even know about and doing our best to live up to a prediction out of fear or obligation. It’s a life as common as it is sad and it’s certainly not the life of freedom and joy I want for my sons.” – Brigetta Schwaiger, “When Your College Son Says, “I Don’t Think I’m Coming Back Next Year.”

Sad that I’m still doing that at 52. When the kids move out, the plan was to buy a house a little off the beaten path and maybe I’d use the land for animal rescue and hubs would pursue his target shooting hobby and then next time we’d speak to each other would be at the funeral of whoever dies first.

And that isn’t what I want.

And I don’t know what that means.

And it also isn’t what the cat and I have in common. You thought I forgot, didn’t you? We both are suffering from testosterone-related issues. That was it. I know. Not very exciting. You thought I was going to say “spends a lot of time chasing shiny things” or “tries to lick my own butt.”

They have added just a pinch of testosterone to my regimen of hormone replacement therapy. On a side note, I can’t auto-refill it because it is a controlled substance – I have to call every time which is fairly idiotic – and I’m pretty sure testosterone is the LEAST controlled substance on the planet but that’s another essay for another day. I have noticed an uptick in energy and general disagreeableness, if the latter is possible.

And I don’t think it’s a coincidence that I’m suddenly more concerned with what I want instead of not rocking the boat for someone else. Although I’m really hoping I don’t start leaping on people and biting them while they are trying to nap. 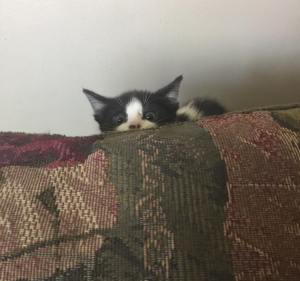